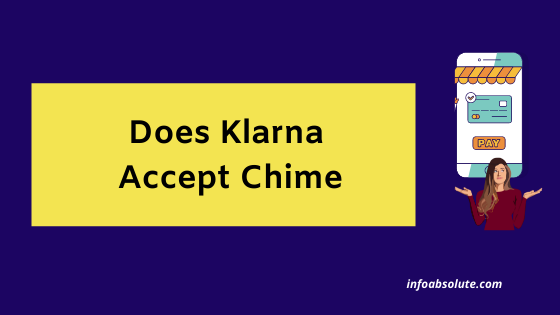 Klarna is a popular Buy Now Pay Later service in US, which also has presence in more than 15 countries. It is a product of a Swedish company with more than 90 million active users. If you are wondering if Klarna accepts Chime, you don’t need to look further. This post gives you the complete information on if Klarna works with Chime along with the likely problems you will face and the answers.

Klarna allows you to buy goods and make the payments in four easy instalments, to be paid every two weeks (Pay in 4 plan) or you can also opt for alternative plan to complete payment in 30 days called Pay in 30 days.

For making the repayment to Klarna, you need to add a bank account, debit or credit card in the Klarna App which will be set up for auto-debit on due dates. And Klarna website mentions that they accept all major debit and credit cards (issued by Mastercard, VISA, AMex)

So this comes accross as an obvious question- for many users banking with Chime if they can link their Chime Card in Klarna.

But does Klarna accept Chime Card? Let’s look at the answer.

Klarna does not accept Chime debit card and there have been multiple issues reported by users when attempting to use Klarna with Chime. However, some Chime users have been able to link the Chime Credit Builder Card successfully with Klarna.

This is actually surprising as Klarna website does mention it accepts all major debit and credit cards (issued by Mastercard, VISA, AMex). And the Chime debit card is issued by Visa. Klarna website does not specifically mention anything to the effect that they do not accept Chime Cards

Infact, there are mixed results here with some users being able to use the Chime card sucessfully with Klarna. On the other hand, some users have not been able to do so or not able to do it currently.

On digging further, we have seen this query has been raised multiple times with Klarna on their app review. Here is a response from Klarna in reply to a query on App in November 2021, on the reason for Klarna not accepting Chime

“Unfortunately, we were forced to stop accepting Chime because of denied payments. That in turn caused our customers to incur fees and in some instances lead to collections accounts.”

So it seems Klarna has temporarily stopped accepting Chime Card due to payment decline issues. However, given the growing popularity of Chime, this may be a temporary issue, since they have yet not called it as an unacceptable payment method on their website yet.

In such case, you can still make an attempt to add your Chime Card in Klarna and see if it works. If it is not supported at the time, you will get a message which looks like this “Please use a different card; we don’t support your bank’s card yet. We are constantly working to increase coverage”.

However, there is a silver lining. You might still be in luck if you have the Chime Credit Builder Card.

This actually makes sense since the chances of payment decline are lower in case of Chime Credit Builder card, since you need to first park the money in Chime secured account (which acts as the maximum card limit) you can spend before being you even use the card.

However, it is not a fool-proof method since some Chime users have not been able to use even Chime Builder Card on Klarna. But it is worth trying, since chances of success are higher compared to Chime debit card.

If you have Chime Credit Builder Card, below are the steps you can follow to add it in Klarna. On the other hand, if you are looking for alternate Buy Now Pay Later Apps which accept Chime, check this post for the complete list.

How to Add Chime Credit Builder Card in Klarna

For adding Chime Credit Builder Card in Klarna, follow the steps below:

What other cards does Klarna accept?

As per Klarna website, they currently accept all major debit and credit cards from Mastercard, Visa, AMEX, and Discover.

So you can see Klarna also does not accept prepaid cards, but there is a work around if you have Apple Pay– that will include those issued by Cash App, Venmo etc.

You can also refer to the page on our website which talks about all the possible Buy Now Pay Later Apps that work with Chime. You may note that the other popular Apps like Afterpay, Affirm, QuadPay (now called Zip) work fine with Chime.

So some Chime users have been shifting to QuadPay as a solution.

To add to growing demand of Chime users, this further makes it a strong ground for Klarna to start accepting Chime on full scale, to cope with the competition.

The fact that Klarna has a big market share and large network of retailers supporting it, but the competition in BNPL apps is also fierce.

It’s a pity that Klarna is not fully supporting Chime, as of now. But you must still try and test for yourself if Klarna accepts your Chime Card, as the scenario is evolving.

Especially, if you Chime Credit Builder Card, it should be able to be linked. Given the ever growing popularity of both these apps, we hope that they will be able to resolve the issue and make it easier to link Chime with Klarna.